Hunt Cup back with a BANG! 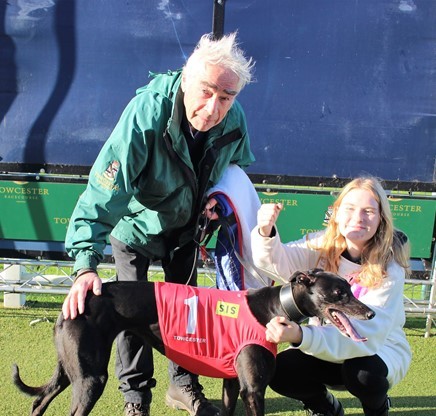 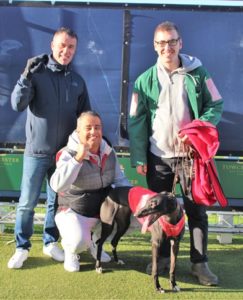 It was the kennel mate of Steve Rayner’s super stayer, Night Time Baby, who held on in a thrilling race to take heat one, beating Mark Wallis’s Ayamza Dream by the tightest of short heads; in a winners time of 43.87s. Burgess Elite finished the qualifiers five lengths behind the pair.

It was another fantastic race for heat two, with Salacres Pippy storming away early doors (recording an impressive sectional of 16.05s) to be caught on the line by Mark Wallis’s Antigua Lava, repeating the fine finishing form from the semi-final of the 1st Containers Marathon for owner A.J.Jeal. A strong finishing Lights Out added another headache for the stewards with a neck covering the first three, who qualify for next week’s semi-final. The winners time of heat two: 43.43s 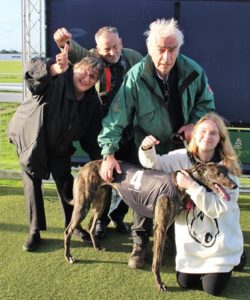 The Stewards needed a break after two exciting finishes and Blueberry Bullet for Mark Wallis and the Bruiser Boyz was more than happy to oblige. The bitch impressed massively, leading from start to finish in the quickest time of the heats: 43.17s.  Chubbys Dubh and Kishlawn Shakira finished off the qualifiers.

After his excellent performance in the Champion Stakes, trainer Stephen Rayner would not have been nervous as Night Time Danny emerged from the boxes last. Coming from the back seems to be a specialty of this proven stayer and he showed it again to the thrill of the crowd as she came to win on the line, beating a valiant Troy Suzieeq by a Neck. Bubbly Cristal also found herself in the hat for next weeks semi-final.
The winners time of heat four: 43.68s 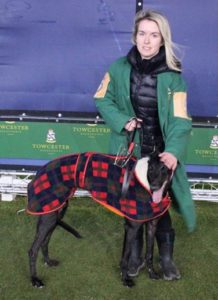