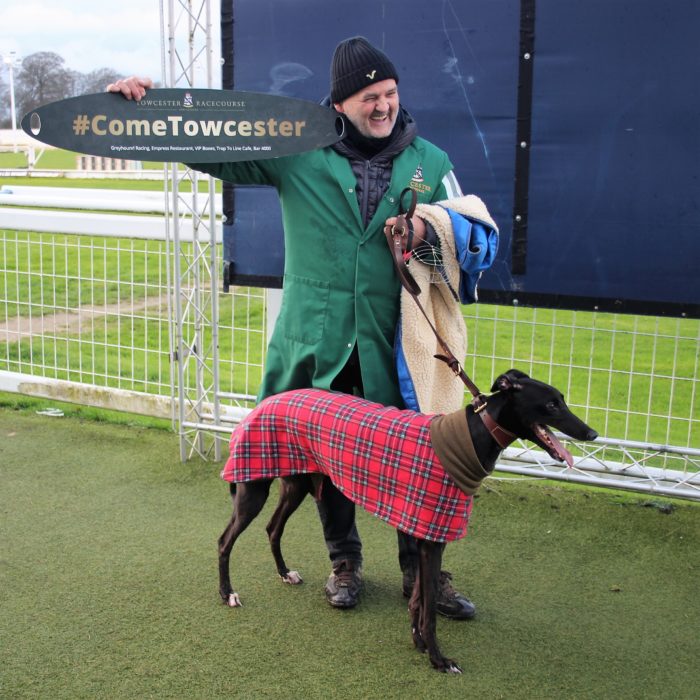 Posted by TowcesterRacecourse on December 6, 2021 | Featured

Like Tuesday’s explosive first round, the best puppies in the country took to the track again, with the second round of the RPGTV Puppy Derby taking centre stage on a cold Sunday afternoon.

As can often be the way with puppy races, the first heat was a messy affair with many of the runners being very lightly raced, however Make Noise was able to avoid much of the trouble as he chased down Smuts New Mut and Moments of Magic to win near the line, the other two qualifying behind for next weeks semi-final. Seamus Cahill’s runner did not trap very well but still made it 2 from 2 in English races, in a time of 30.57s for owners Keylight Hire Ltd. 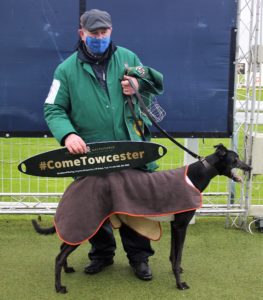 The second heat could not have been more different from the first as Signet Denver took the race from the second bend ahead of a fast-starting Alien World who chased the eventual race winner all the way to the line. Kevin Hutton’s runner won in fine style in a time of 29.59s for owner A.W.

Bresley and will be sure to perform well again in the semi-final.

Swanley Alexis won heat 3 for Jamie McGee and owner J Edwards. The Irish runner trapped the best and led all the way, completing an Irish 1, 2, 3 ahead of Maturereflection and Enthusiast. The winners time for Swanley Alexis was 29.79s.

Rab McNair had always fancied Havana Bale Out as a world class greyhound, but a lack of track craft and bad trapping hasn’t allowed her to show it, however all that changed in heat 4, arguably the most mouth-watering heat of the day. Havana bailed out of the traps, earning an incredible 4.15s sectional and then continued to extend her advantage to win in a time of 29.17s for Elizabeth McNair and the K.S.S Syndicate. The shock of the heat came when fancied, Lautaro, failed to qualify. However Skywalker Forte and Callmesteve were worthy qualifiers.

Graded Performers of the weekend

* Peter Harnden had a treble on a winter Friday morning. Wins for Savana Mimi, Salacres Neeson and Salacres More completed the hattrick. 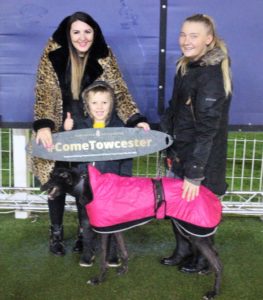 * Trubbys Sigh for trainer Heather Dimmock and owner Mr S. Trubshaw, won its second race on the bounce and will be going for the hattrick in his next race.

* Fabulous Era for Lawrence Tuffin, won when returning from a two-month injury, giving a nice reward for the hard work that goes into bringing a greyhound through recovery.

*  Castell Thriller for Mr M. J. Gilbert and Robert Short won on debut, showing great heart to come from behind for the win and we will be looking forward to his Towcester career.

* Jumierah Lola, a newcomer onto the Towcester graded scene, won its third race in a row on Sunday and although it came in an open race, its first two wins came in graded racing. The Frank Gray runner not only stepped up in distance but also joined open class competition for the first time, but it did not hinder this front runner who ran well to complete the hattrick of wins.

All photos are credited to Jim Tate Photography